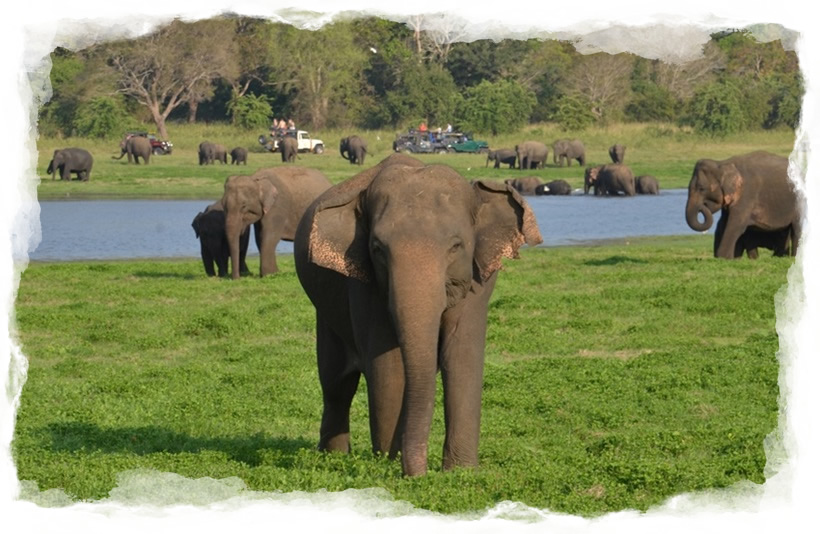 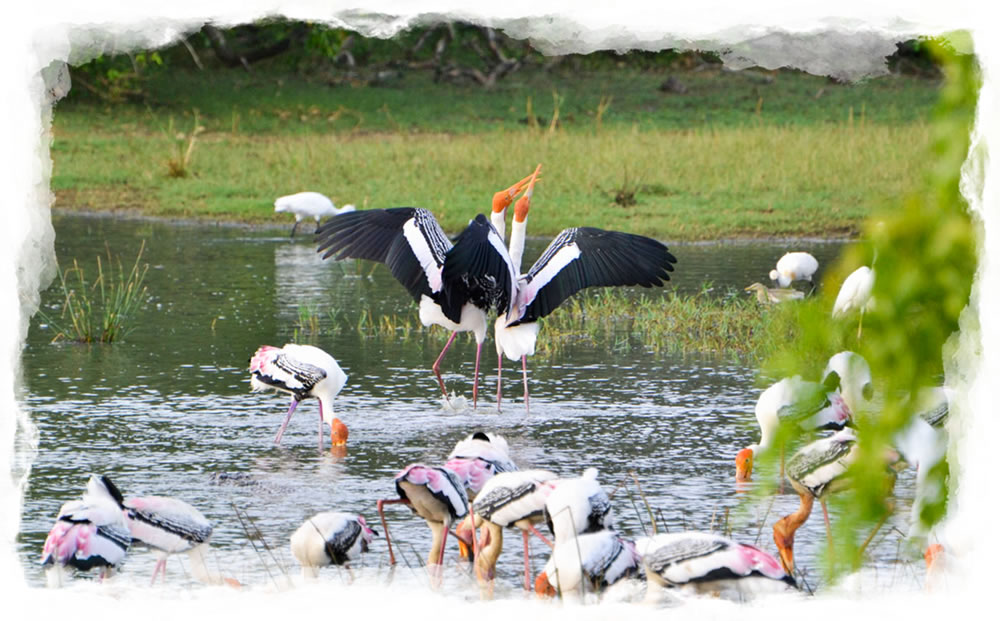 Welcome to Sri Lanka. At the airport, you will be warmly greeted by both of our Ovation Travels representative and guide and proceed to Habarana.

Check-in to the hotel and evening travel for a safari at the Minneriya National Park.

If you’re up for a serious rumble in the jungle, then Minneriya is your Colosseum Spreading over 8800 hectares, this is a sanctuary for Elephants. Minneriya is home to herds of deer and amole birdlife, but its spotlight remains between swaying trunks & flapping ears.

Park your jeep on the bank of the reservoir and switch off its engine. Watch carefully as herds of elephants – one by one – roll on to the grass-covered banks, to feed on tender shoots. In fact, this is the largest elephant gathering in the world – over 300 at a time – which has garnished the park to become a magnet for wildlife enthusiasts across the globe. 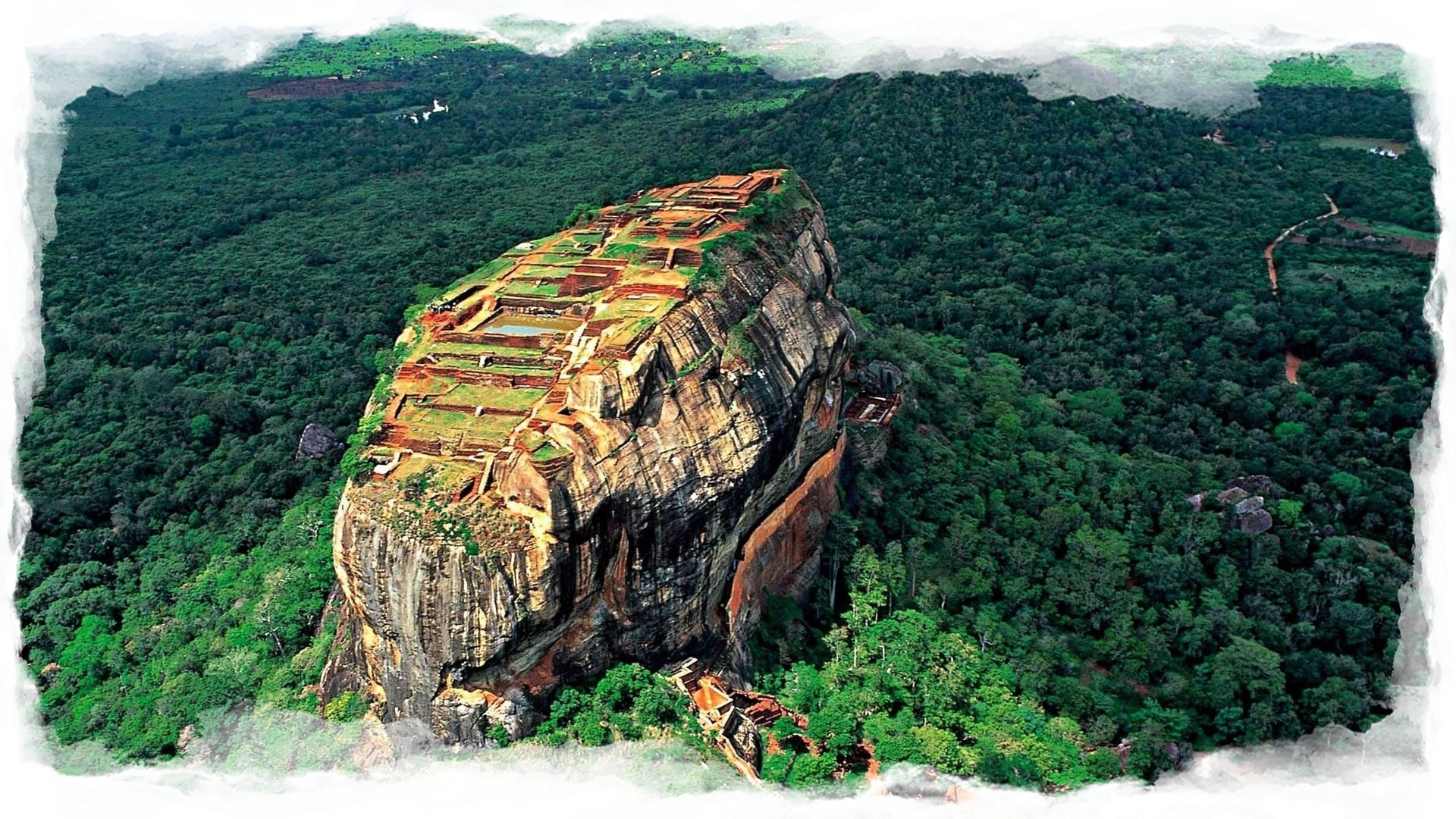 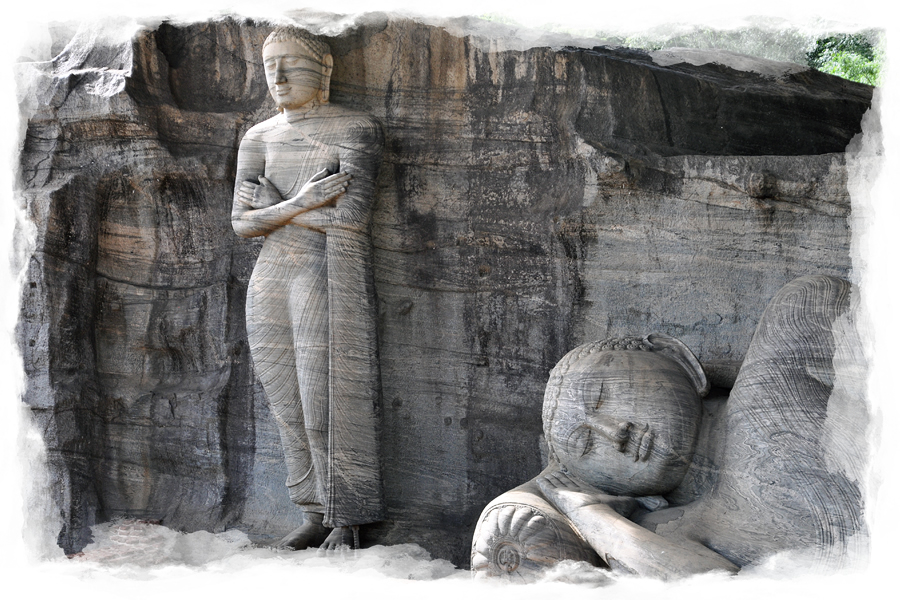 Collect your breakfast packet provided by the hotel and proceed to Sigiriya, which is a world heritage site.

The Sigiriya Rock, 5th century rock fortress which is a world heritage site, built by King Kashyapa (477-495 AD). The ‘Lion Rock’ is a citadel of unusual beauty rising 220 metres from the scrub jungle. The rock was the innermost stronghold of the 70-hectare fortified town. A moat, rampart, and extensive gardens including the renowned water gardens ring the base of the rock.

Visit the world-renowned frescoes of the ‘Heavenly Maidens’ of Sigiriya, which are in a sheltered pocket of the rock approached by a spiral stairway. These frescoes are painted in earth pigments on plaster.

Afterwards, proceed to Polonnaruwa & visit the ancient city of Kings.

Island’s medieval capital (built in 11th and 12th century AD) rose to fame after the decline of Anuradhapura. It is a world heritage site. Many of the ruins are in an excellent condition. Its great artificial lake, the Parakrama Samudra which covers an area of 6,000 acres, feeds a network of irrigation canals and minor tanks. Visit the ruins of Royal Palace, the Gal Viharaya which has 4 splendid statues of Buddha in ‘Upright’, ‘Sedentary’ and ‘Recumbent’ postures carved out of rock, the Audience Hall, the Lotus Bath and the statue of King Parakramabahu.

There are also monuments of famous places of worship such a Shiva Temple, the Lankathilake, the Watadage, the Galpotha, the Kiri Vehera and the remains of a former Temple of the Tooth Relic. 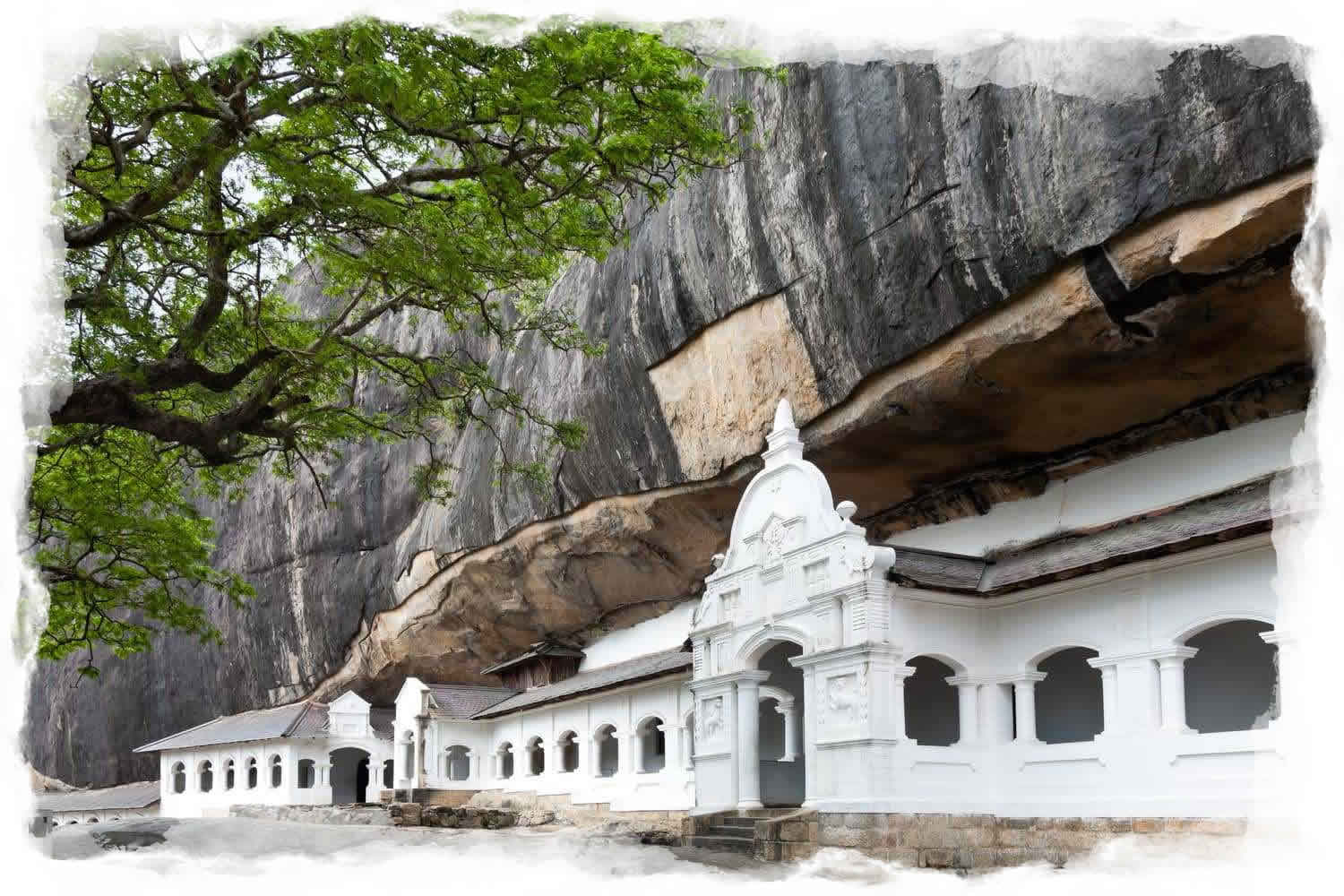 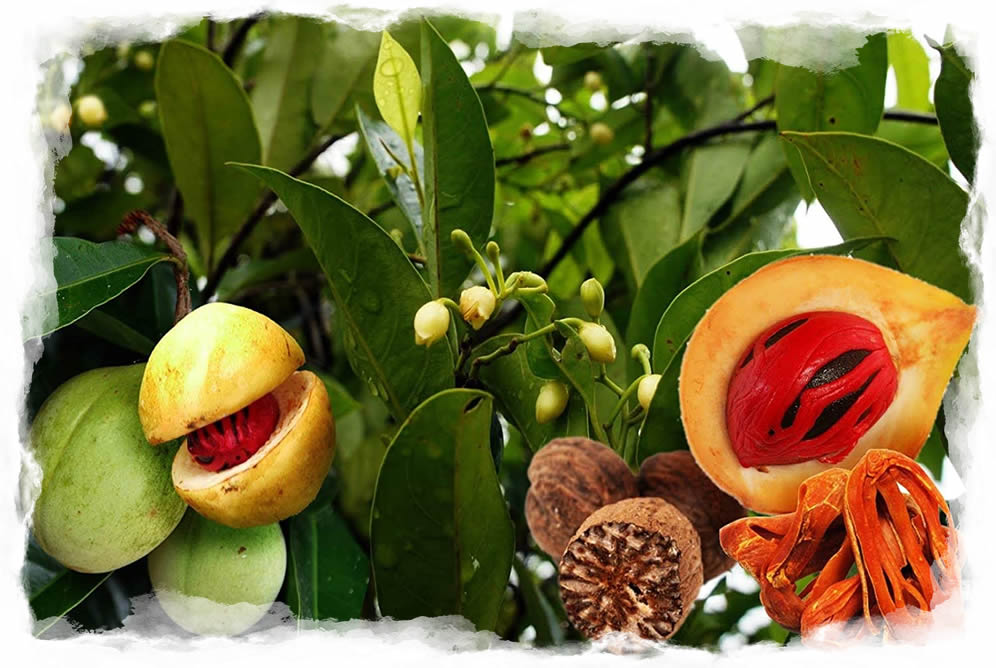 Check out after Breakfast & and transfer from Habarana to Kandy.

Dambulla rock temple was built by king Walagambahu in the 1st century B.C. and it is a World Heritage Site. It is the most impressive of Sri Lanka’s cave temples. The complex of five caves with over 2000 sq. metres of painted walls and ceilings is the largest area of paintings found in the world. It contains over 150 images of the Buddha of which the largest is the colossal figure of the Buddha carved out of rock and spanning 14 meters.

Sri Lanka has always been renowned for its spices. Over 15 different spices call Sri Lanka home and many of them are traded in the international spice market. Cinnamon especially is endemic to Sri Lanka, and highest quality ‘true cinnamon’ can be obtained here.

After lunch, check-in to the hotel at Kandy and evening visit the temple of the sacred tooth relic of Lord Buddha. 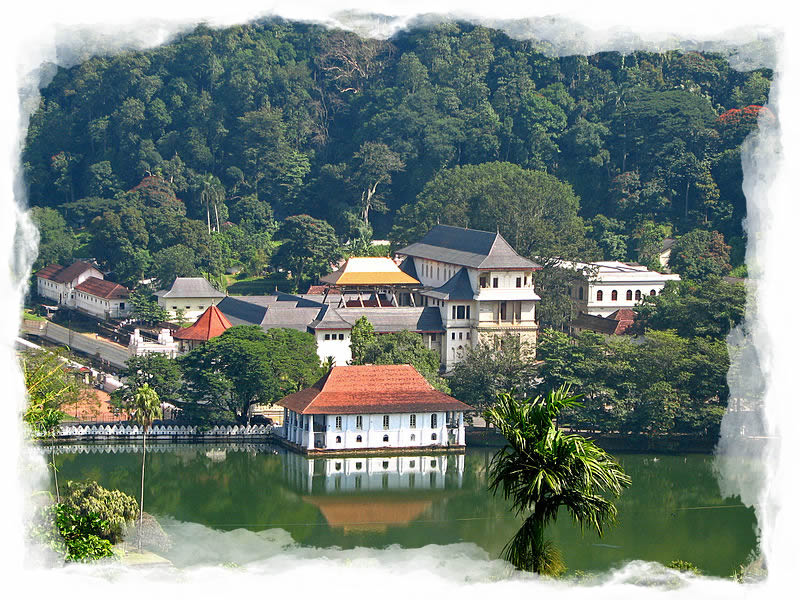 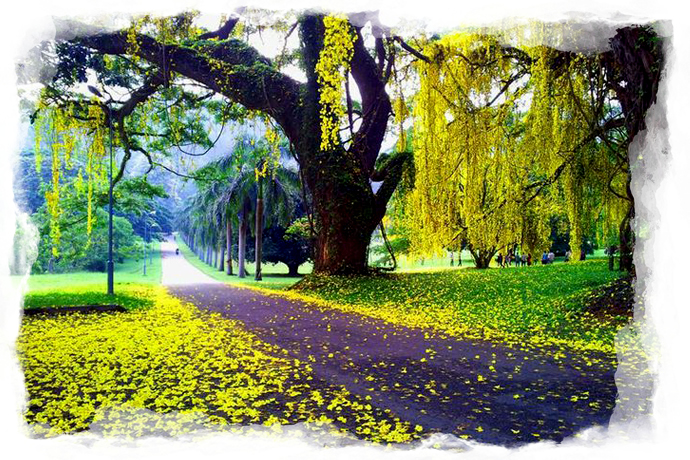 Last ruled by King Sri Wickrama Rajasinghe – before it was brought under the British rule in 1815, Kandy – the World Heritage Site & last royal capital of Sri Lankan kings – crafts in array in culture, history and heritage in the minds of visitors across the globe. Experience an ancient Kandyan legacy engraved around its crown jewel, the temple of the sacred tooth relic of Lord Buddha.

A stroll across this small lakeside town – cradled among the misty hills – will feature the Kandy City Centre – bundled with latest and world class brands, bazaar, an arts & crafts centre, as well as gem museum & lapidary walk-in color as you glide through fresh fruits and vegetables in the Kandy market.

These stunning gardens were once reserved exclusively for Kandyan royalty. Today, even commoners are allowed in to enjoy the most impressive and largest (60 hectares) botanic gardens in Sri Lanka. Highlights include a fine collection of orchids, a stately avenue of royal palms, the extraordinary, aptly named cannonball fruit tree and 40m-hight Burma bamboo. Another big hit is the giant Javan fig tree on the great lawn, with its colossal central trunk and umbrella-like canopy of branches. Peradeniya is 6km from central Kandy.

Fine tube you’re evening by stepping to the beat of traditional music & drumming amplified by a cultural show enhancing the rich and vibrant culture of the Wonder of Asia, Sri Lanka. 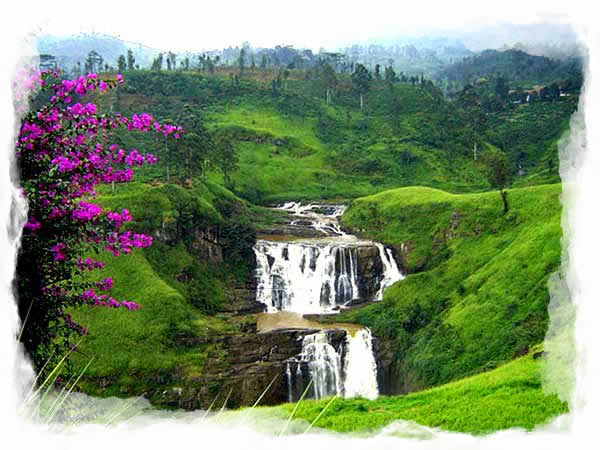 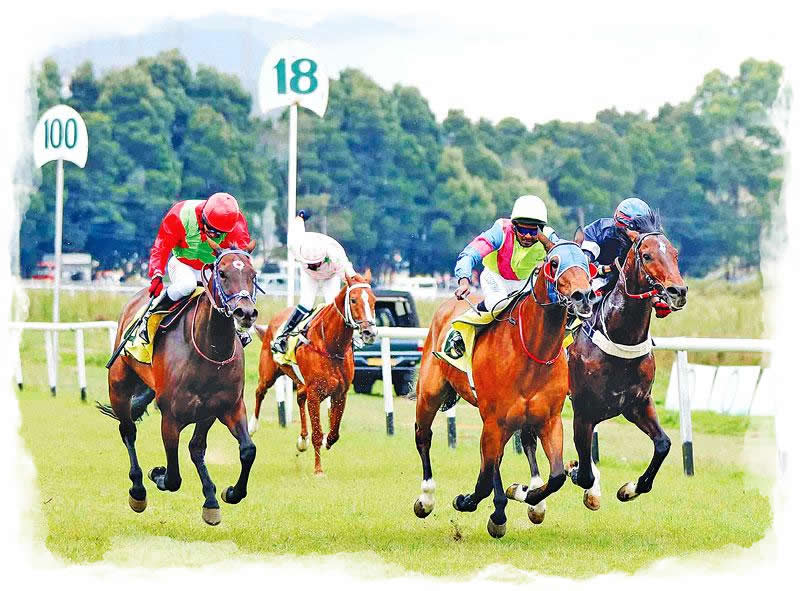 Check out after Breakfast and transfer from Kandy to Nuwara Eliya.

En route to Nuwara Eliya visit a tea plantation and a factory.

Arrive in Nuwara Eliya you will explore “the city of drawn”. The city established by the British in nineteenth century, known as “Little England” and is a popular holiday resort

Misty steep roads, twisting through lush green blankets of tea bushes in a cool climate, remind visitors that they are within the range of the renowned British colonial retreat, Nuwara Eliya. Augmented by an English countryside atmosphere, the city of light – once governed by English & Scottish planters – is still studded with colonial bungalows, hedgerows & one of the finest 18-hole golf courses in the world.

A hike through the green grass and red-brick walls should present breathtaking views of a buzzing countryside hamlet. Drive through green valleys of the hill country pierced by endless waterfalls & dotted by tea pluckers draped in bright-colored saris. Rent a bike for a gentle ride along the banks splashed by the waters of Lake Gregory.

Tour a tea factory to learn how tea grown and produced and make a custom blend to take home. Ceylon tea, perhaps the most well-known and famous tea in the world. As the most important export of Sri Lanka, we’ll take you behind the scenes of this world-renowned product. You’ll meet the people who pick it, learn about their lives, walk thought the tea plantations. With your guide as a translator feel free to ask them questions about their lives and what it’s like to work in a tea plantation.

After lunch Check-in to the hotel at Nuwara Eliya and enjoy the rest of the day at leisure. 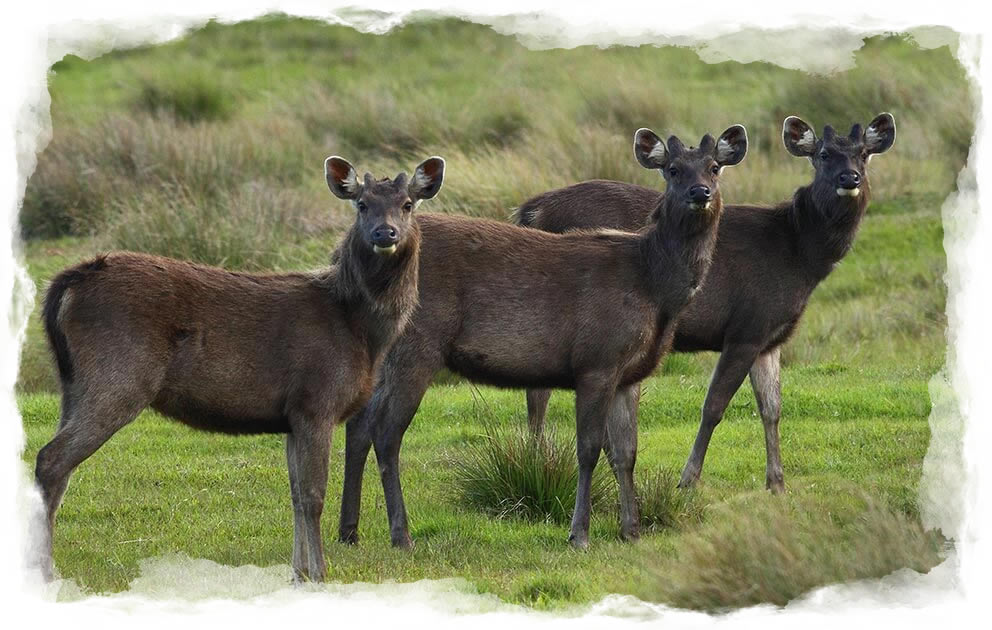 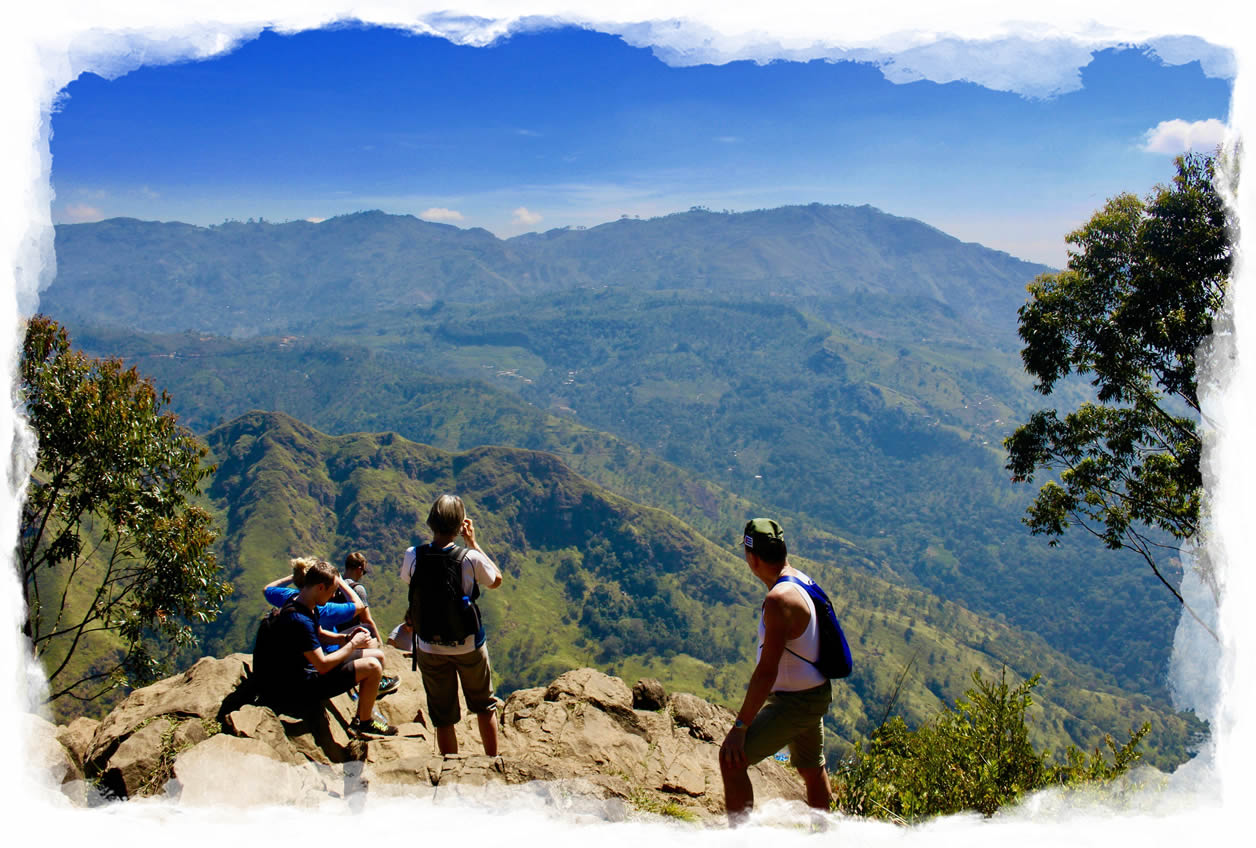 Collect your breakfast packet provided by the hotel and proceed to Horton Plains, which is a world heritage site.

Horton Plains is located in the central highlands of Sri Lanka at an altitude of 2,100 to 2,300 metres. Lust greenery and wide-spread grasslands add to the beauty of Horton Plains. The country’s second and third tallest mountain peaks, Kirigalpoththa and Thotupola Kanda are located on the west and north of the plains. The key attraction at Horton Plains is the World’s End, a sheer drop of over 2,800 feet.

Tourists and locals alike travel in their numbers to enjoy the amazing view and the thrill that World’s End offers. The beautiful Baker’s Falls is another famous attraction in this region. The Horton Plains Park is home for mammals such as samburs, leopards, bears, monkeys and endemic lizards and also many birds and plants.

Check out after Breakfast & transfer from Nuwara Eliya to Ella. 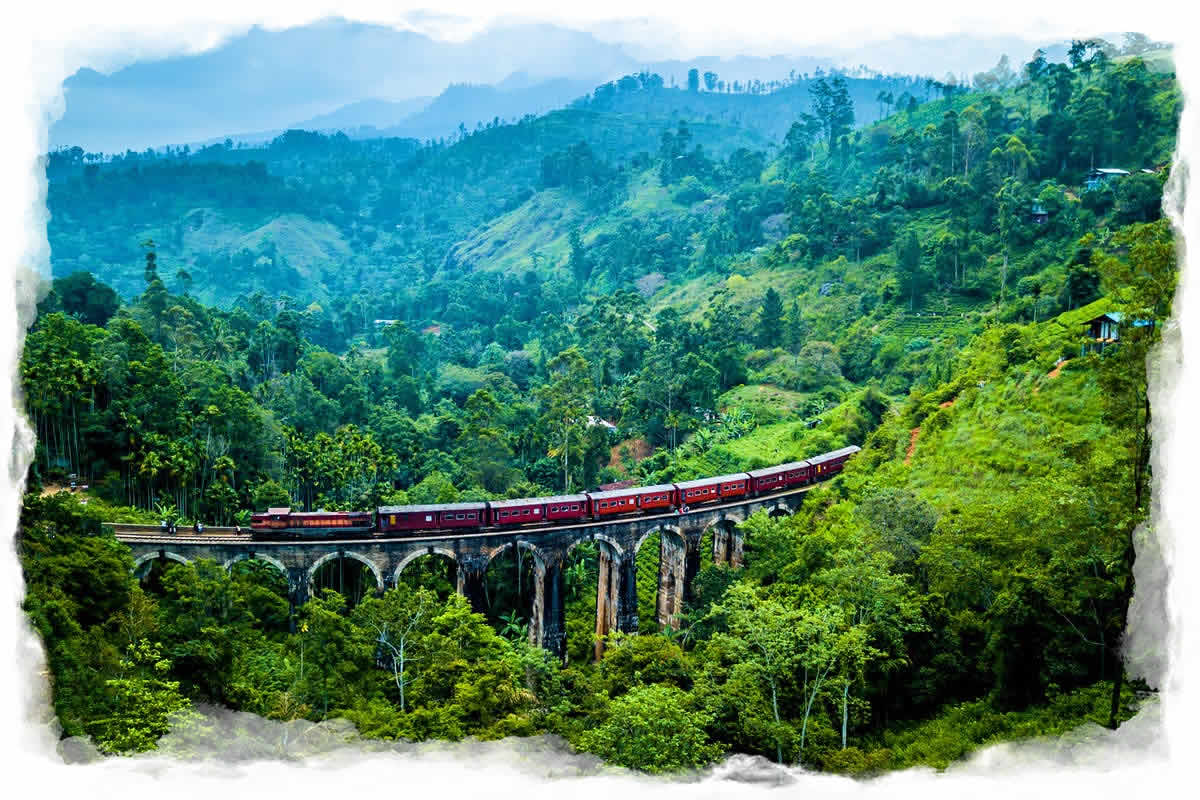 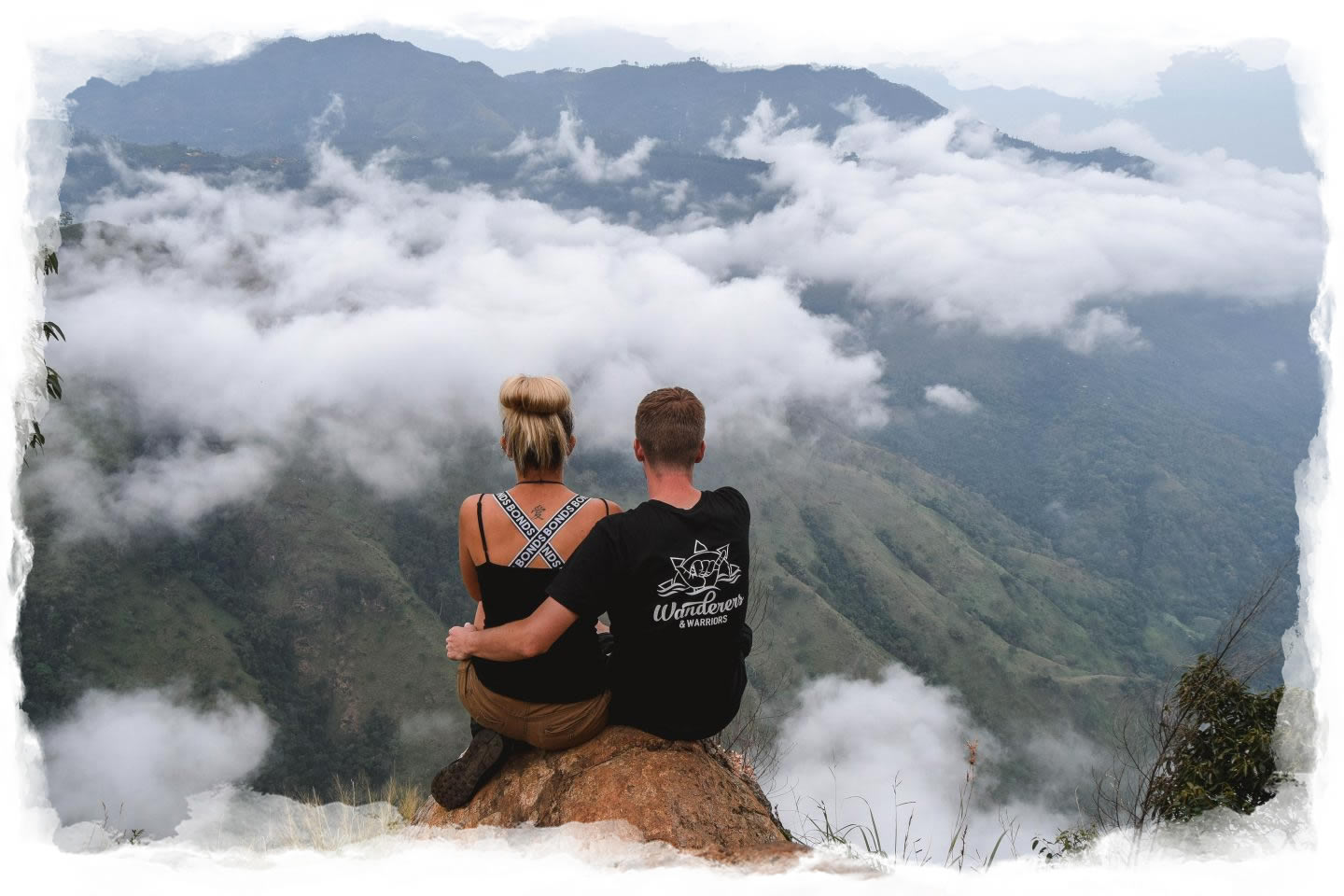 After breakfast, proceed to visit Ella to feel the beauty of nature.

Ella is a small village in the highlands of Sri Lanka which is filled with tea estates, mountains, waterfalls and of course with some good air to breath.

Lots of people make Ella as one of their must visit destination just to witness the breathtaking views it creates. It is a dream place for many trekkers with some of the best hikes the Island provides. This hidden village got vastly popular among the tourists lately.

Views of mist and clouds covering the summits of the mountain range and the morning sun rise in Ella are spectacular scenes to witness and captured. After a fresh hike in the morning, hit a waterfall, grab some tasty Sri Lankan foods from somewhere with a beer, rest for a while and go for a rail walk to famous Nine Arch Bridge in the evening, you would sure love the all experiences.

Ella got its own historic values with the link to the Legendary Ravana stories too. You can explore all of them while you are here. 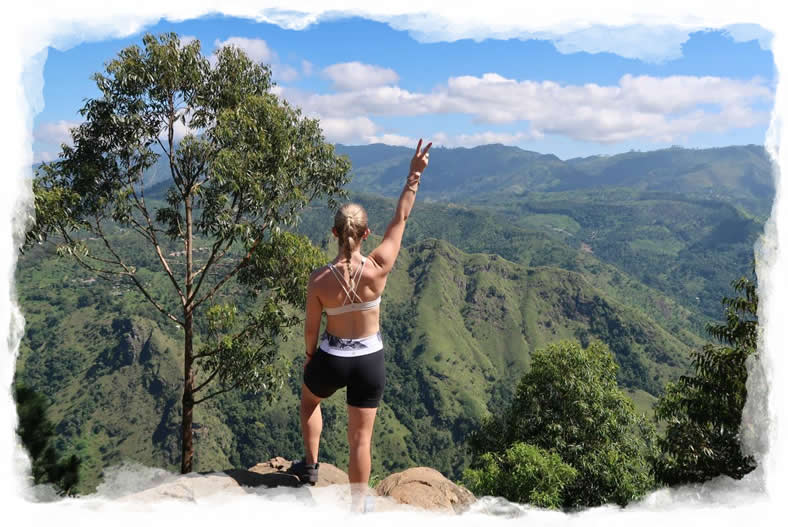 Check out after Breakfast and transfer from Ella to Mirissa.

Check-in to the hotel at Mirissa and enjoy the rest of the day at leisure.

Mirissa beach is located close to the southern-most part of the island and consists of beautiful beaches that promise an absolutely tranquil holiday. Today, Mirissa is renowned as a prime location for whale and dolphin watching. The beach also provides ample opportunities for Surfing, deep sea diving, snorkeling and river trips. 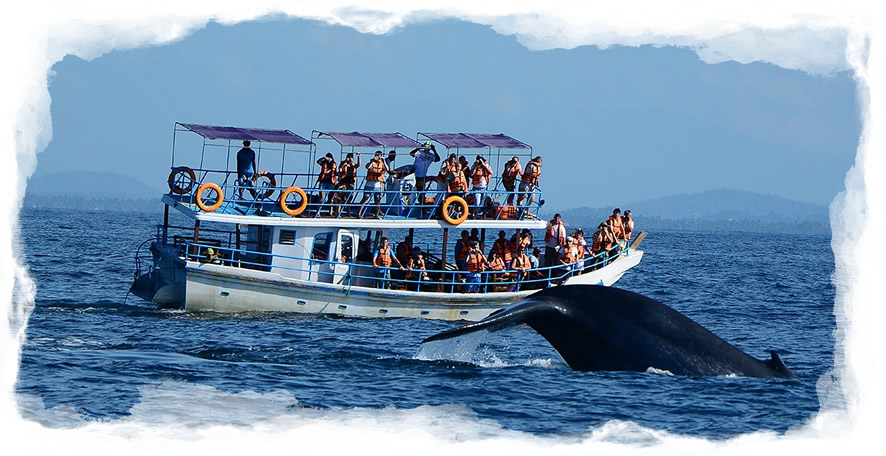 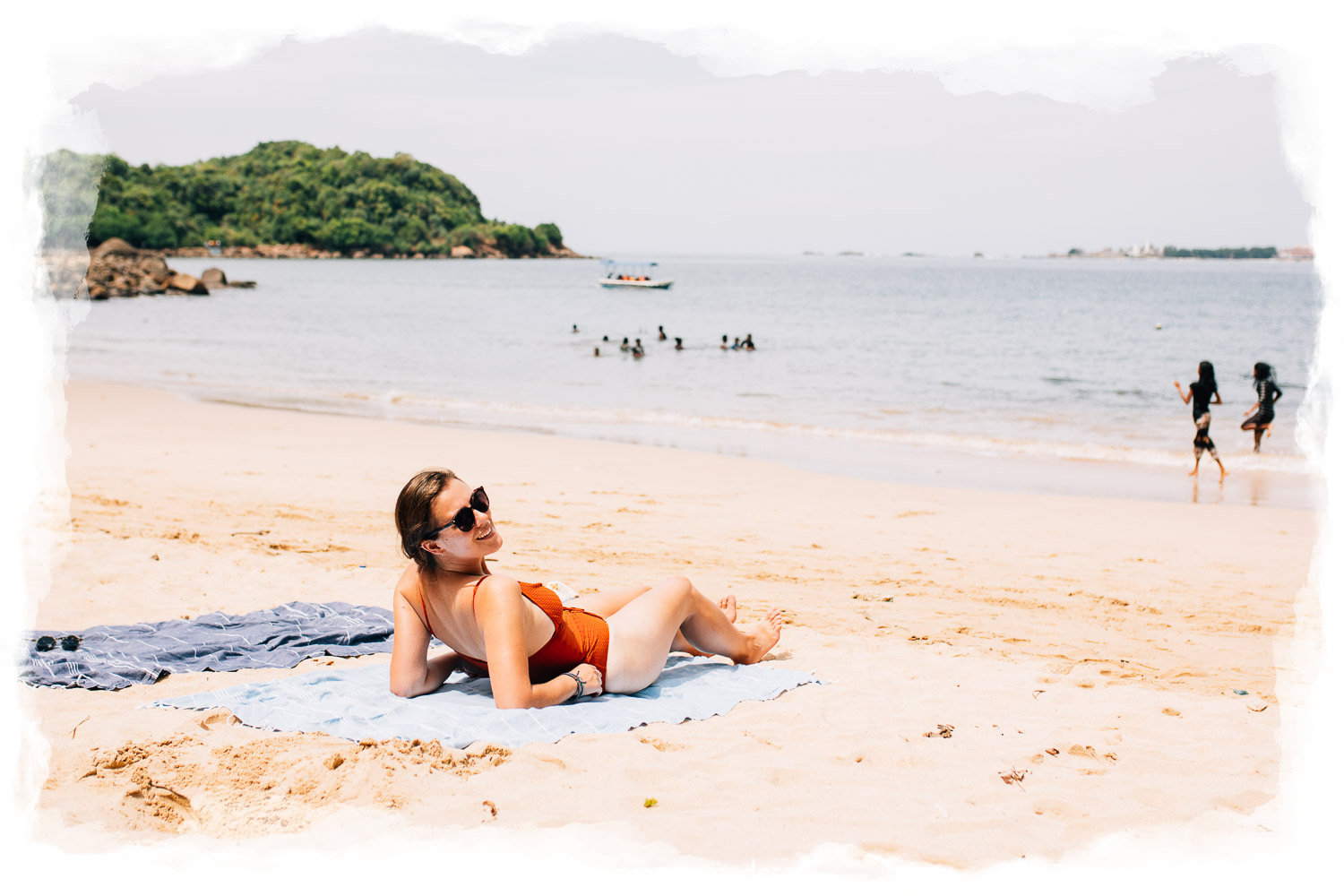 Collect your breakfast packet provided by the hotel and proceed to the harbor and enjoy an early morning whale watching tour.

On completion return to the hotel & leisurely spend the day at Mirissa beach. 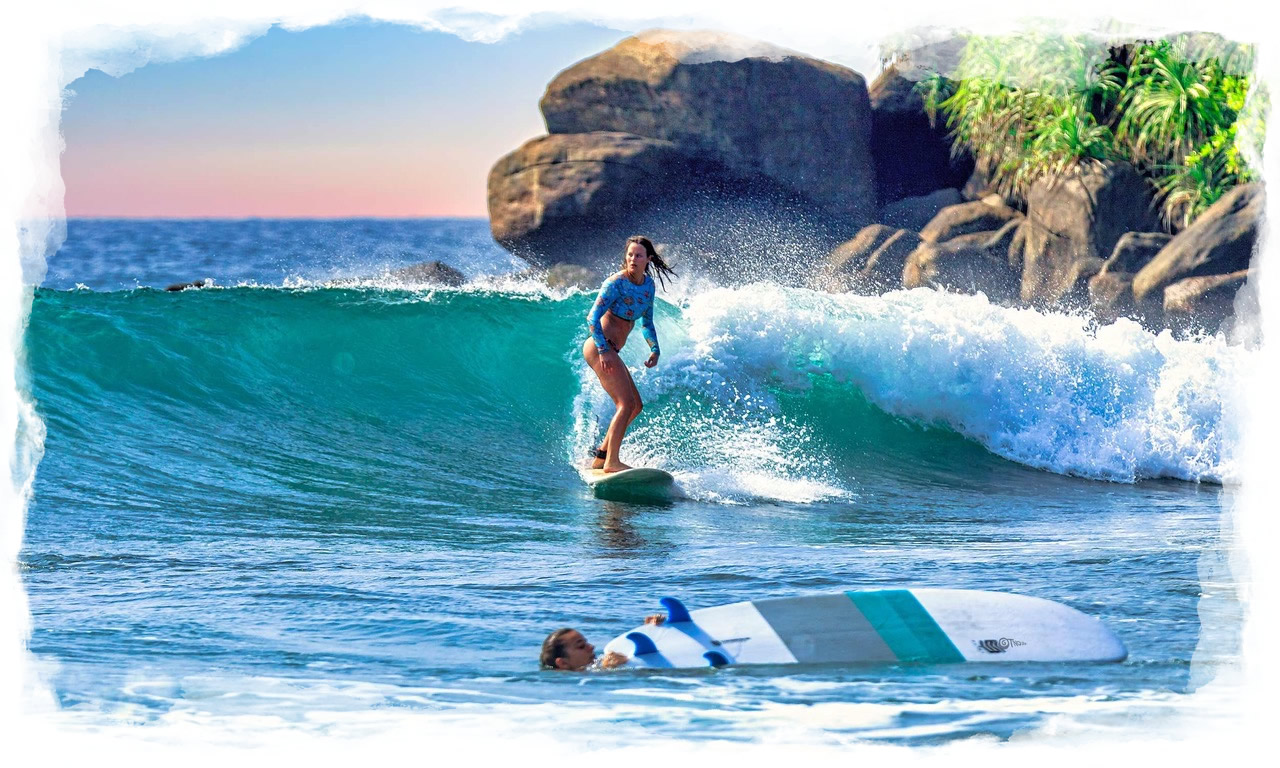 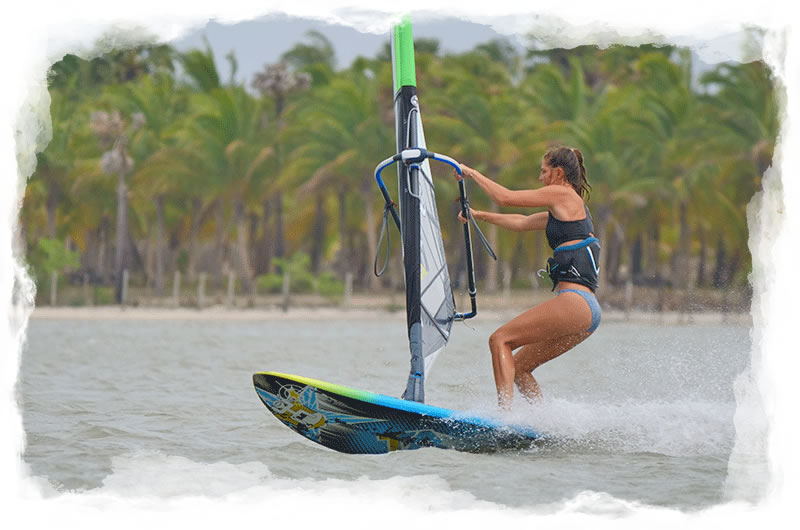 Check out after Breakfast and transfer from Mirissa to Bentota.

Check-in to the hotel at Bentota and enjoy the rest of the day at leisure.

Bentota, undoubtedly has some of the best stretches of clean sandy beaches in the country boasting of numerous romantic settings carved by both the river & sea. This unique experience leads to nothing, but an enchanted gateway to bliss.

Float into the ocean for some deep-sea fishing or get wet with some serious rumble on the water with jet skiing, surfing, diving or body boarding. Finally, cherish the golden sun sink into the horizon as you sit back gently under a shady palm tree. 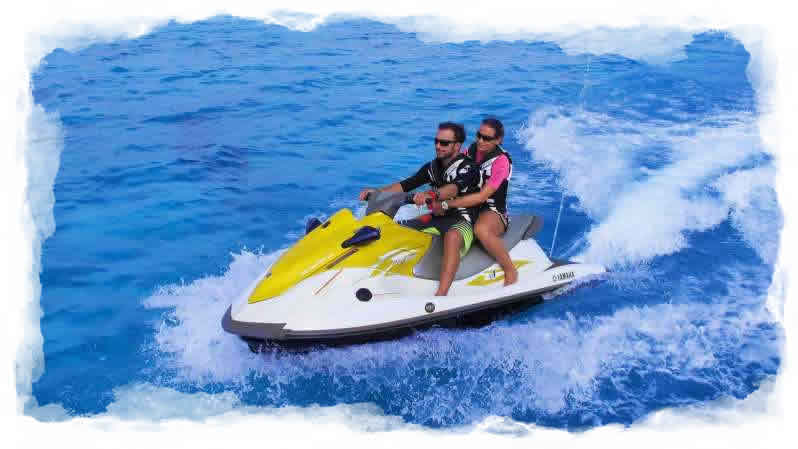 After breakfast, Enjoy the whole day Leisurely at Bentota 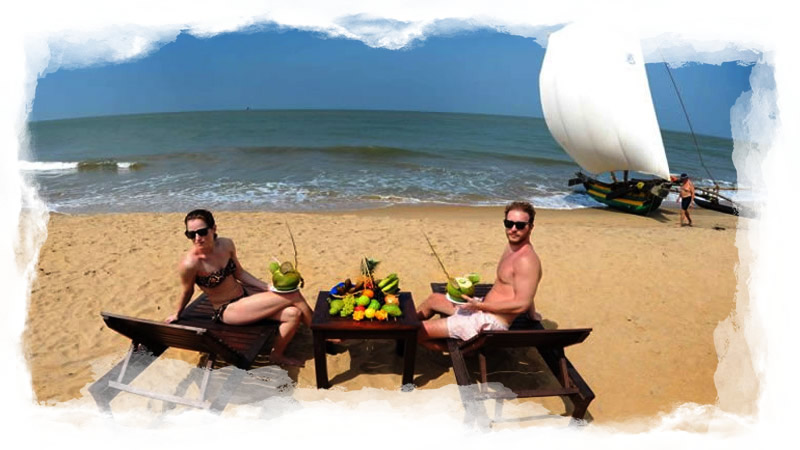 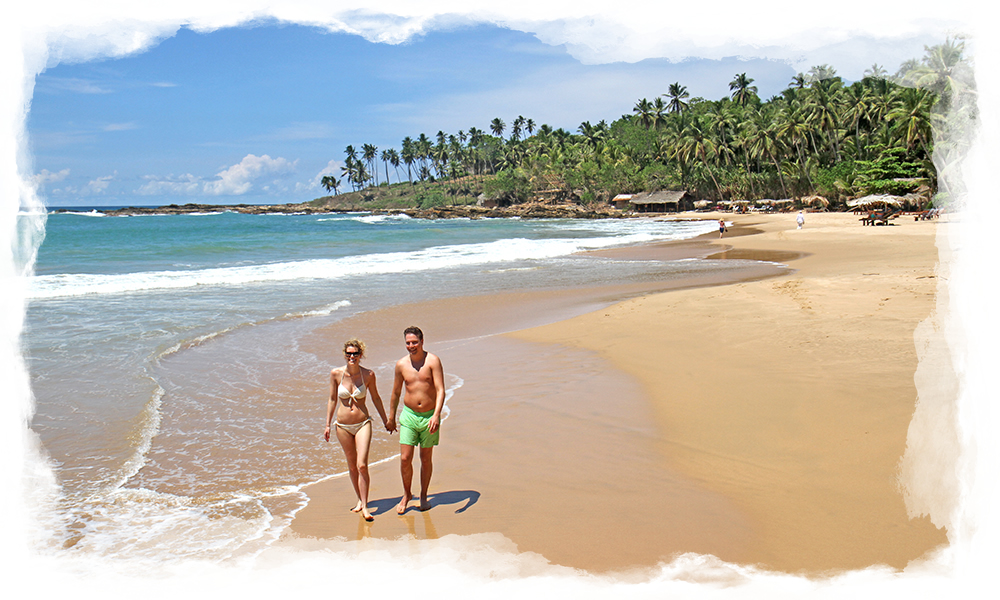 Check out after Breakfast and transfer from Bentota to Negombo.

Check-in to the hotel at Negombo and enjoy the rest of the day at leisure.

Located within a fairly close range to Bandaranaike International Airport, Negombo – the cinnamon hub of the Colonization of Dutch – offers some of the most exciting diving stretches in the country. With quite a pleasant beach and lagoon watch how Negombo dishes out some of the best lobsters, prawns and crabs found in the country, right on to your table or simple grab your kiteboards of an enthralling fly over crashing waves.

Today Negombo also represents an ultimate nightlife featuring bars, disco bars and clubs. So, jazz up to the rhythm of the West, and be ready for a night of ‘fest’, because at Negombo everything is ‘best’. 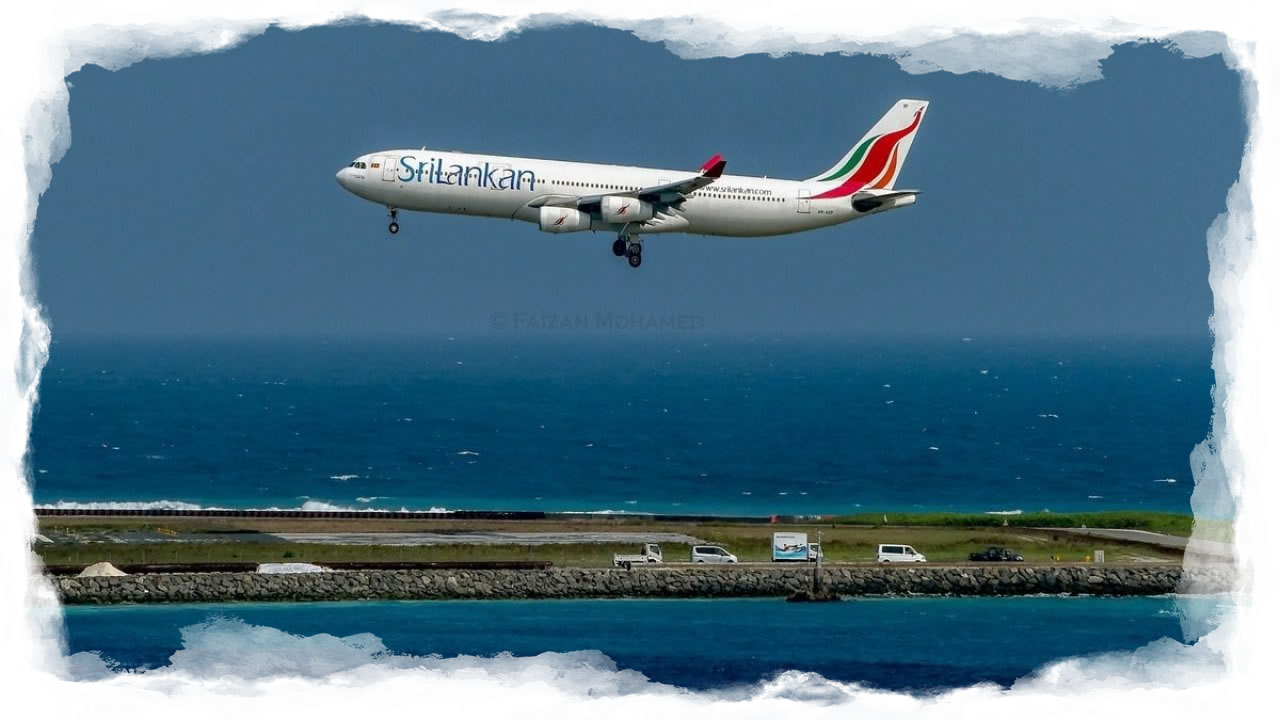 The guide will take you back to the international airport for departure.

We hope and wish that you will visit this beautiful country again.